Where have all the pictures gone?....

I've just spent half hour trying to get into my own site! New passphrases, passwords,when was your Mom born...eeeck, it's getting a bit freaky now.
I can't even remember what I was going to say now, I'm so shocked that I was let on here. I'm nearly expecting a squad at the door anyminute now to search me and the house....
Posted by Neasa at 6:36 PM No comments:

The kids are all fed (as you all know by now I mind 2 kids after school) The kids are all playing inside and out (had an exceptionally fine day last Friday, by fine, yes I mean DRY) and we had 2 "incomers". Kids that aren't normally there. I didn't care, kids were playing, clothes were blowing in the breeze, and it's Friday!!!! I have a standing order in my "New Neighbours" house on Friday which, "ahem", usually, "ahem" requires a bottle of vino. (Hell, I'm minding her kids all week, and she has to put up with mine on the weekend, I think we deserve a glass or two!!!"
Anyways, while I'm sitting with an old neighbour (she's not old, she just moved away!) we hear a thud/bang/crash (take your pick) in the hallway. I had heard Leah come screaming up the hallway so I knew it was her. 'Cause the screaming stopped just after the bang we heard.
To make a long story short(ish), I went to survey the damge, thought "Oh no, somethings broken" (It's not like Leah to not get up after a fall) She was lying in a little heap in the hallway. I picked her up and she looked like she was crying, but I realised she had done the crying thing too hard, or winded herself.... Her mouth was wide open trying to cry or grab a breath but it wasn't happening. I at this stage cried for Jerry, who told me to "Relax, turn her over". I did and she started crying to my relief. "She's crying = she's breathing" Then I turn her back to me and ask her where's she's hurt. Before my eyes her eyes roll back in her head, her lips turn blue and she goes limp in my arms. I thought she was dead or dying in my arms....
To say I panicked would be an insult to people who just normally panic. I lost the block. I screamed for my next door neighbour sooooo loud and ran across to her, after leaving Leah to Jerry, that I had a sore throat that night. By the time I got to said neighbours house, the kids were running out saying that shes ok. Jerry hopped her on his good arm, she came to, not a bother on her. The above happened in about the space of 10 seconds.
I still feel a bit sick when I think of it. I also feel soooooooo bad for the kids who saw me lose it. (I apologised to all the Mommies involved, 3..)

I'm the first one to say "Do a first Aid course", (had a nasty experience a few years back, I'll tell ya later Mags!) and I can't believe I kept putting it off. Not even putting it off just not checking up on it.
Anyways, will update tomorrow or during the week about our "visit of doom" to the vet..(which is a happy story!!)
Posted by Neasa at 4:38 PM 2 comments:

Finally figured it out...

.....and got myself a hit counter! Not that I'm expecting many hits but it's nice to know someone's checking in now and then...

Jerry and my big brother are in Barcelona for the Poker tourney (No, they're not playing) They felt it was their duty to support the Irish team ~insert rolling eyes here~! Well one of the guys on the team (of 4) is a local lad from here so we are very proud of him. I wonder if there is any crafting competion in Barbados that I would just HAVE to show my support at.....not likely ~more rolling eyes~ As of tonight Ireland are out of the competion. They had to finish in the top 4 for the final table and we came 5th. Story of our lives really....

Leah is loving the Naoinra. Cathal is unlearning a little bit more every day! And I'm (kinda) back working again. I'm minding 2 kids. School runs and after school. You know what? It really IS as easy to feed 4 as it is to feed 2. Who'da thought???!!! You just put a bit more on! I always thought that was a load of doo-dah. It's great to have something to do all day between drop offs and pick ups (all different times) instead of going round the house getting nothing done. Also we have a new routine now, lunch, homework, play, dinner and play (as opposed to lunch, play, play, dinner and homework)so to be honest it's working out really great. Mind you, they're great kids and practically mine anyways! I always thought people who had loads of kids were crazy but maybe not! Then again, I do get to hand them back!


Anyhew, thats it from here. This is a photo on the Poker thingy blog. Thats Jerry in the Yellow Rossi t-shirt at the back. Pity they called them the Iceland team.....all those pale legs in shorts and burnt faces I suppose....And our local lad Joe (who finished 2nd in his heat, the best of the lot, pros included) in the green t-shirt beside him. Gooooo Jooooooe! Well done 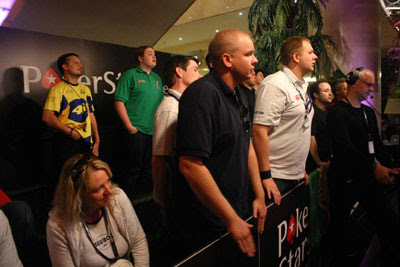 The Missus started Naoinra (pre-school in the Gealtacht) yesterday. She was horrified with her clothes "I'm not wearing this. Where's my nuniform?" (Not a typo!) We get there still full of the joys of "going to school like my brother" but it doesn't take long for reality to kick in. Momma's not staying. I have never in my life heard screams like it. They are very good in her Naoinra in that they discourage parents to hang around. It just prolongs the agony on both sides. I knew she'd be fine when I left, but still.....
Mags, (you all know her as the "new neighbour"!) came up with me and she drove me back to the vilage (in my car, I couldn't see, had something in my eye....) where we met another distraught Momma who left her screaming child in the same place (who only started crying when she heard mine crying....) We went for coffee where myself and other distraught Momma sat and watched our watches, the clock on the wall, our mobile phones....etc. My sis rang during this coffee and I checked with her that my watch was right. They are only in for an hour this week but yesterday morning was the longest of my life.
I was there promptly on time to pick her up and waited for her to come screaming out the door into my arms. No. I had to go in and prise her away from the table.
Today she was skipping in to meet her "team"? (I hope this isn't baby talk for "gang"...) when she turned and asked "Are you coming in Momma?" She was whisked away by one of the teachers to see the "babies". She never gives dolls names, they are all her "babies". Anyways, with a wink from the teacher and a swift retreat from me, today went well. So well in fact, that she didn't want to come home again today. I was the first Mom in line so her name was called first. We were the last to leave. Hmmmm.....not sure what to make of this. Will keep ye updated on any progress. 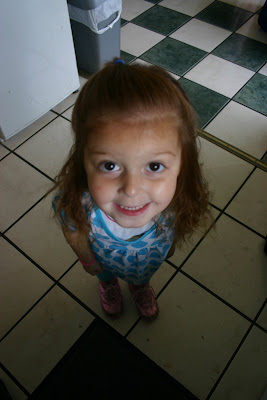 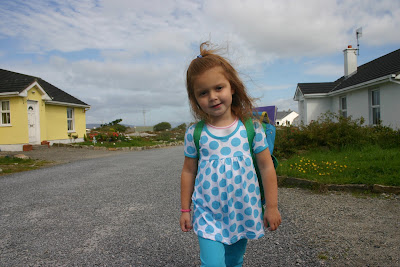 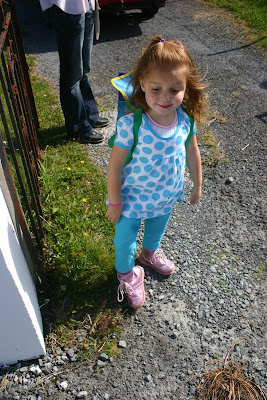 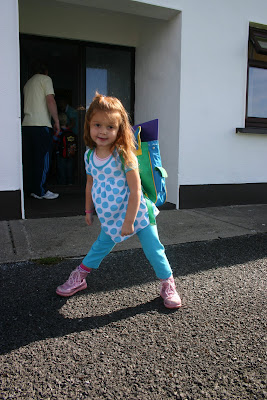 Forgot to mention that she insisted on wearing her "Space Boots" instead of the lovely black patent Barbie shoes I bought her. I've decided to pick my battles! Space boots I can live with....

A few notebooks I altered for Cathals teacher at the end of the school year. I forgot to post them up at the time. (I think I lost the pictures in cyber space for a while....) Anyhoos, here they are... 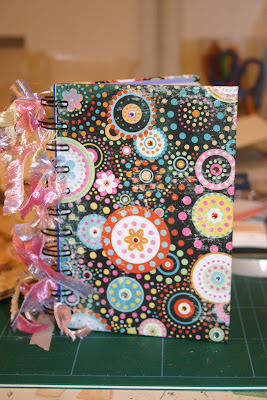 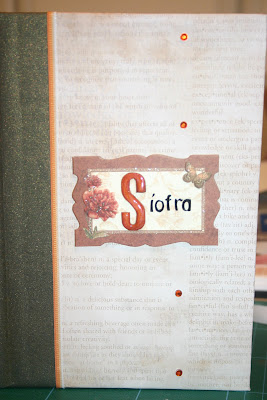 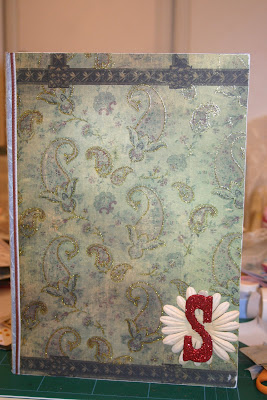 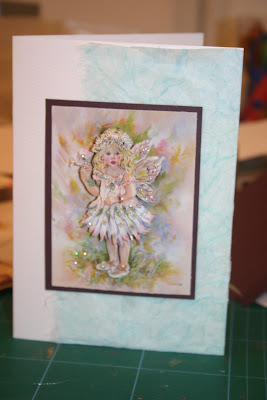